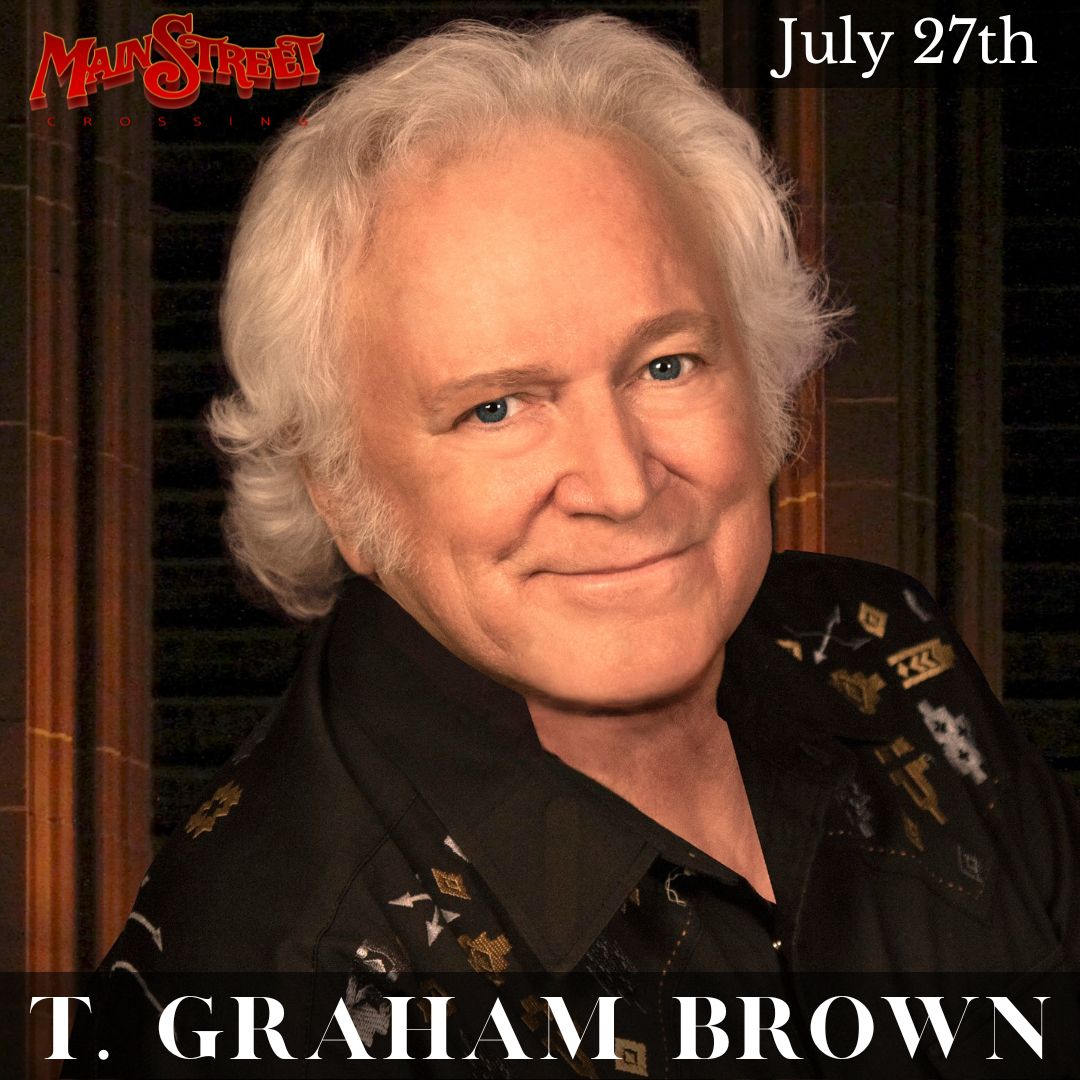 We are so excited to welcome T. Graham Brown to Tomball, Texas to perform on the Main Street Crossing stage. What an honor it is to host you for a live concert with an artist up-close. Buy your tickets and read a little more about T. Graham Brown below.

It was one of the most vibrant and exciting time periods in Country Music history – the mid-1980s. A new and exciting crop of talents were springing up all over the place – and T. Graham Brown remembers it like it was yesterday.

“I remember Randy Travis and I hit at about the same time,” he recalls. “Our first singles were so close to each other. I’m not sure if it was the same week or not. Then you had Marty Stuart, Billy Burnette – who went on to Fleetwood Mac. Steve Earle was there, too. I saw him at the Grand Ole Opry a few weeks ago, and we talked about that year. We had a great year. We called our club ‘The Great Credibility Scare of 1986.’ All of us were having fun, there was no competition between us, and we all loved each other. Keith Whitley was one of my best friends, as well, and we were touring together a lot. It was a great time.”

Brown’s initial entry to Country Radio was the sad and soulful “Drowning In Memories.” That Top-40 single helped him to establish himself, and by the winter of 1986, he had warmed up to audiences with the bluesy hit “I Tell It Like It Used To Be.” Other hits quickly followed, with his first self-penned release “Hell And High Water,” which became his first number one song. “I Wish That I Could Hurt That Way Again” and “Don’t Go To Strangers” were the next releases, which all became chart-toppers.

The soulful vocal stylings of T. Graham Brown were all over the airwaves, as his sophomore release Brilliant Conversationalist added more titles to his arsenal of hits, such as the seductive “The Last Resort,” and “She Couldn’t Love Me Anymore.” It was a time period that Brown sums up as something of a blur.

“Doing shows, visiting radio stations and promoting our records, kept me out on the road over 300 days a year and that was a lot of traveling! This was when I was on tour with Kenny Rogers, who was the biggest thing going back then. I was learning so much about the business and having the time of my life. I wouldn’t have missed it for the world!”

His audiences continued to make him a radio favorite as he continued to amass more hits like “Darlene,” the smash duet “Don’t Go Out” with Tanya Tucker, and the regret-filled “If You Could Only See Me Now.”

At the same time his singles were climbing the charts, T.’s powerful voice could also be heard on radio and television. His sense of style provided the platform for a successful series of cameos in commercials for international brands such as Coca-Cola, Harrah’s Casino, Burger King, and Taco Bell. It’s his work with the popular Mexican eatery that he is perhaps best known, with a series of commercials under the mantra “Run For The Border,” a campaign that lasted four years. Brown says it was an exciting time – and one where he ate more than his share of Meximelts and Nachos Bell Grande dishes!

As the 80s progressed into the next decade, Brown continued to flex his artistic muscle. A well-received concert album enabled him a chance to pay homage to his early influences, like the incomparable Otis Redding, and his hero George Jones, who he teamed up with on several projects, including the CMA Award-winning Vocal Event of the Year release, “I Don’t Need Your Rockin’ Chair.”

It was a gripping 1998 release about his battles with alcohol – “Wine Into Water”- which helped him introduce his music to the Christian audiences. This iconic song has been recorded by over a hundred artists, most recently by Loretta Lynn, on her critically acclaimed project, Full Circle.

In recent years, his first-ever Gospel album, Forever Changed, netted him a Grammy nomination, with the promise of more such music on the way. A collaboration from the disc, “He’ll Take Care of You,” paired him with Country Music Hall of Famer Vince Gill.

Now entering his fifth decade as an entertainer, T. Graham Brown continues to branch out in his career. Before moving to Nashville in 1982, he made a few cameos in feature films, including 1977’s Greased Lightning with Richard Pryor. More recently, he’s started acting again, and his colorful personality can be seen in such films as Saving Samuel and Ticket To Nashville. He is also featured in the television series The Dream Motel, which contains a unique premise.

He even acted in the stage play, A Scattered, Smothered, Covered Christmas, the Waffle House Musical, where “Wine Into Water” was chosen for the score.

That being said, there’s not much that Brown would change. His career continues to sail along at a pace that seems to suit him well these days.

“I’m having more fun out there now than I ever have had. I’m not out there chasing the hits. I’m just trying to stay out there. We’re planning on doing another Gospel record later this year. I’m doing some acting, which I am enjoying. I’m no great actor, but as long as they keep calling me, I’ll keep doing it. It’s a lot of fun.”

And, for T. Graham Brown, it’s all about a career that he enjoys. He’ll tell you with a grin, “I’ve got a band and a bus, and I’ll keep taking the music to the people as long as God lets me. It’s what I love to do!”