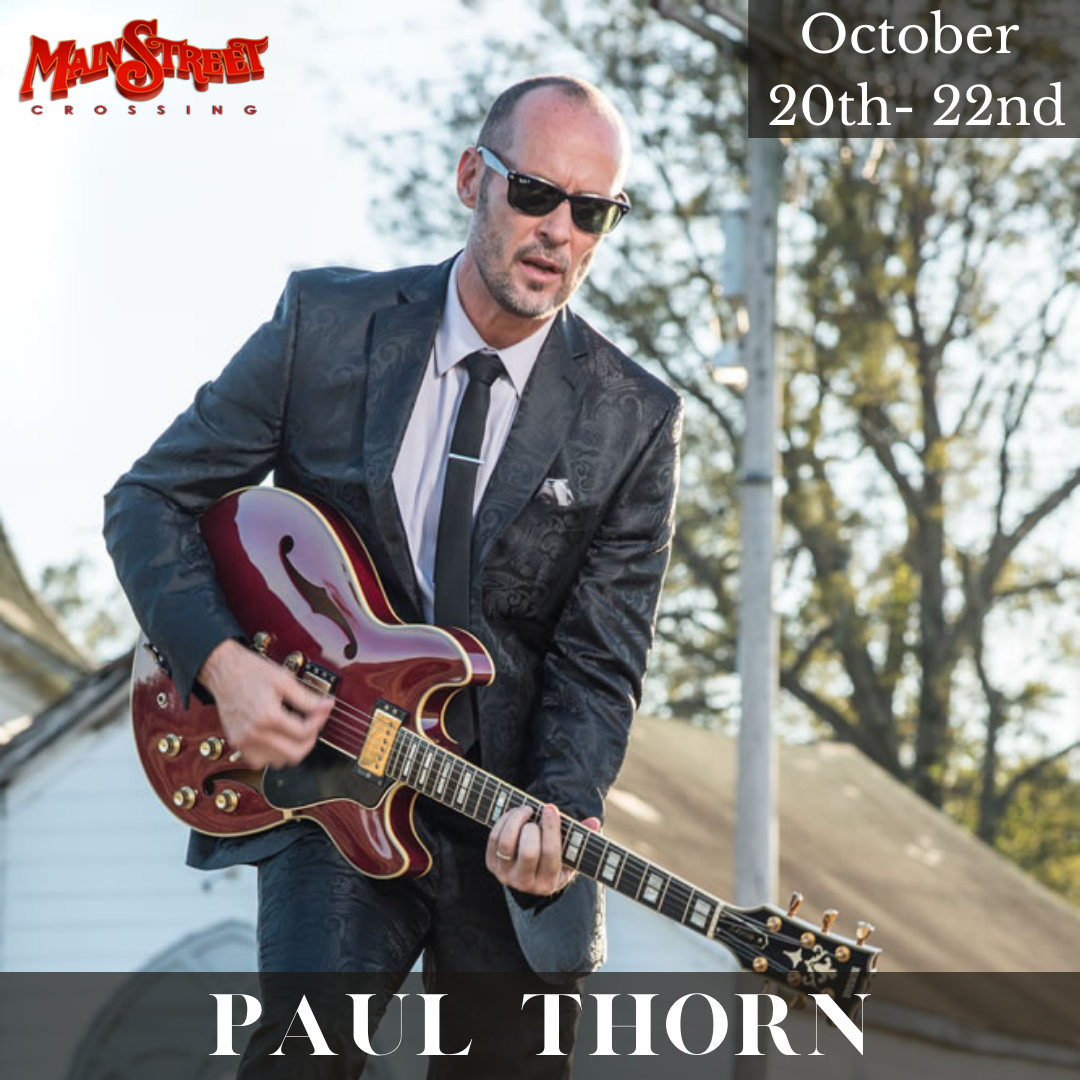 We are so excited to welcome Paul Thorn to Tomball, Texas to perform on the Main Street Crossing stage. What an honor it is to host you for a live concert with an artist up-close. Buy your tickets and read a little more about Paul Thorn below.

Some years ago I happened to see Paul Thorn performing on an outdoor stage at a street festival in the heart of a small Mississippi town. Suddenly, in mid song, Thorn stopped playing and looked down at the upturned, sugar-splattered face of a fan on the front row. “I sure would like me a funnel cake,” Thorn announced. The crowd exploded with laughter. By the end of the next song, someone in the audience had responded, and soon Thorn was happily munching on the doughy confection.

And that, dear people, is one more shining example of how Paul Thorn is able to breathe in the air around him, everyday and commonplace, and exhale something original and often side-splitting funny. It’s a kind of genius, and it’s there plain to see, in his music, his art and through his performances, which not only showcase his chops as a singer-songwriter, but as a pitch-perfect improv comic.

His audiences love it. And they come back for more because no two Paul Thorn performances are alike. For further confirmation of this, check out Thorn’s YouTube videos, though I warn you. You will find yourself a long time in this rabbit hole.

We live in a world where the terms “artist” and “genius” have been rendered meaningless through overuse. To use either in describing Thorn, though, is not overreach. Pick up any of his dozen or so CDs. The evidence is plain to see. Just listen.

The scenery of Thorn’s rural South is changing. The trailer parks, gravel roads around Tupelo and high school beauty queens flicker in the rear-view mirror. Two years ago, Thorn returned to his early gospel roots with the release of “Don’t Let the Devil Ride.”

In contrast with earlier work that riffed on short-term love affairs, as well as “kissing the right one good-bye,” the writing on Thorn’s latest release, “Never Too Late To Call” features music from a man who is with the “right one” and is happy to be there.

This offering, seven years in the making, features all original material, some songs written by Thorn, others co-written with his friend and longtime manager Billy Maddox. The CD was recorded at Sam Phillips Studio in Memphis and produced and engineered by Grammy winning wunderkind Matt Ross-Spang.

In the case of what is arguably the CD’s most tender composition, “Sapphire Dream,” Thorn teamed up with his daughter Kitty Jones, who co-wrote the song and accompanies her dad on vocals.

Jeweled birds fly under crushed velvet skies
And the blue rain don’t fall on me
The sun is on our face; it’s a perfect place
And the one I love is here with me, in my sapphire dream

Particularly poignant is “Breaking Up For Good Again.” On this track, Thorn is accompanied by his wife Heather. Their harmonizing is not only lovely, but resonates with a ring of truth known to two who have driven together that rutted, bumpy road every married couple must travel.

Counselors of would-be newly-weds would do well to require their young charges to read and discuss the lyrics of this song:

Anger, tears and pride, are hard to hide, I lost my cool
I said some hurtful things, I did not mean, we both were fools
I know we need some space, I’ll call you in a couple days
We’ve come this far by now we know
We’ll never let each other go

Much has been written about Thorn’s early years performing in his father’s Pentecostal church and later coming under the tutelage of his Uncle Merle, a pimp and small-time hustler. While those early relationships were formative and offered their attractions, the admonition of Jesus to love one another seems to hold powerful sway with Thorn.

I asked him about it.

“I’ll tell you where I got that from. My father was a minister, and one of his strongest qualities was he had time for the big people and little people too. … In fact, I went and visited him yesterday, and when I got there, there was a guy standing on the porch, dirty clothes, hadn’t had a bath.

“My mom walked on the porch and she gave him a two-liter 7-Up bottle filled with water because he didn’t have water in his house. She gave him a plate of fried chicken for his supper and told him he could come back tomorrow if he didn’t have any food.

“They’re not talking about it. They’re just doing it. If I got it from somewhere, that’s where it came from.”

While that sentiment has been there all along in Thorn’s earlier CDs, it’s more prevalent in “Never Too Late to Call.”

“There’s a theme running throughout the record about people needing each other and reaching out to each other,” Thorn said.

Life goes by so fast you better not blink
You might not have as much time as you think
Let go of any grudges while you’re still around
You can’t say you’re sorry when you’re laying six feet in the ground
The best time is right now.

As is the case with all of Thorn’s songs, the CD’s title track, “It’s Never Too Late to Call,” comes with a story.

He wrote the song for his sister Deborah who died in 2018. When Thorn was on the road, he’d long to talk to someone after his shows, hours after the members of his immediate family were asleep. But his sister, a night owl, would often stay up all night.

“I could call her and she’d always be awake,” Thorn said. “I wrote that song about her.”

The song is one more example of a distinguishing characteristic of Thorn’s work — a quality his fans love — the intensely personal nature of his lyrics. Thorn’s music has always been a reflection of where he’s been or where he is in his life. On “Never Too Late to Call,” we find mellower Paul Thorn. The razor wit and the gently humorous commentary on life’s existential questions are in evidence, but here there is a peace about his life’s journey. Or, to put it in his words, “I’ve been such a lucky boy. I’m crying two tears of joy.”