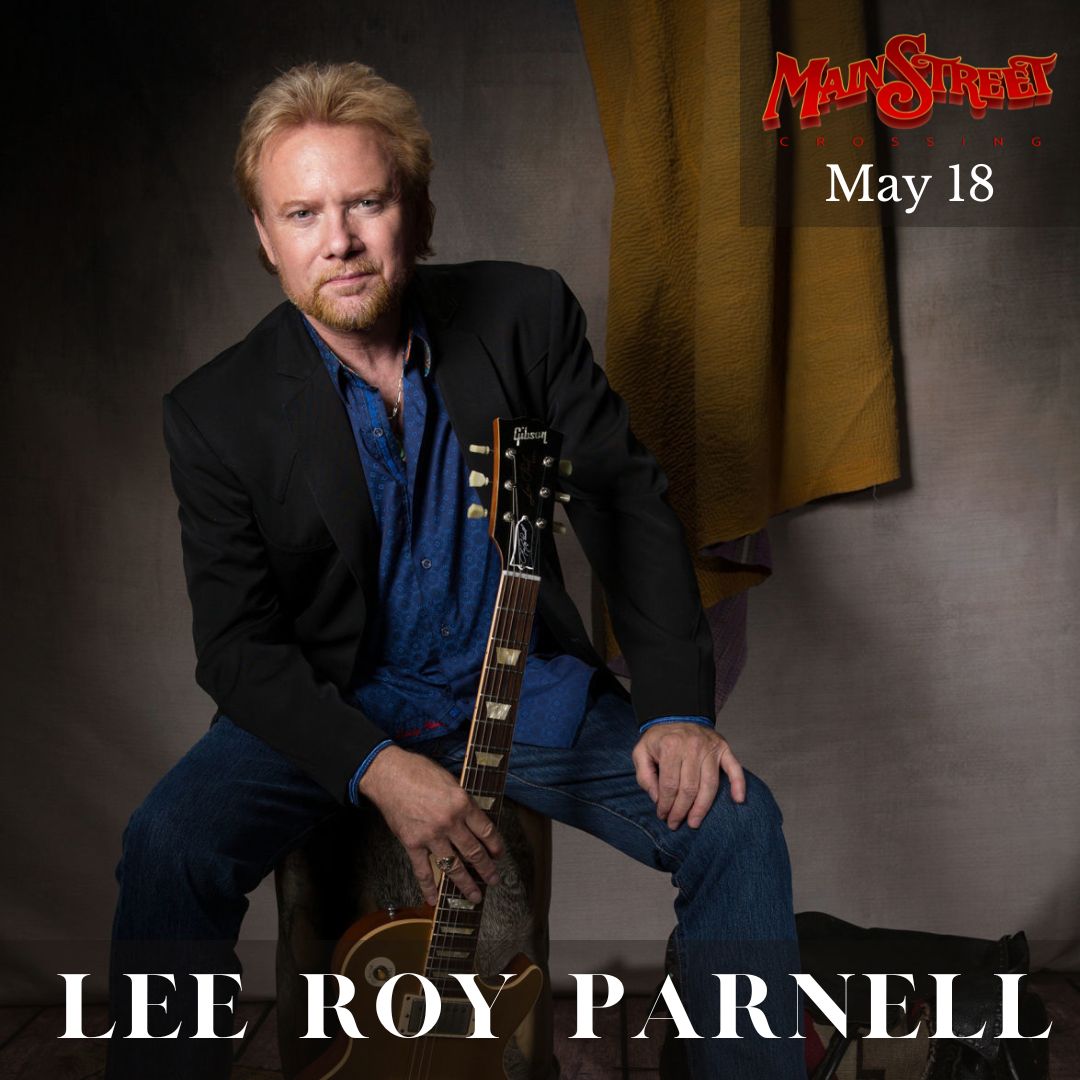 We are so excited to welcome Lee Roy Parnell to Tomball, Texas to perform on the Main Street Crossing stage. What an honor it is to host you for a live concert with an artist up-close. Buy your tickets and read a little more about Lee Roy Parnell below.

No Depression may have said it best when they called Lee Roy Parnell “a fine writer blessed with a rich, soulful vocal delivery and a blistering array of guitar chops drawn almost equally from Texas blues, Memphis soul, and Southern rock traditions.”  Parnell is part of a long line of Texas roots-music eclectics and is among the elite few who can be identified as a triple threat. After honing his skills over more than a decade of playing clubs in Texas and New York, the Americana/Blues-Rock artist known for his guitar prowess (particularly slide guitar), smooth soul-drenched voice, and top-shelf songwriting skills laid a new foundation in Nashville. Parnell launched his solo career on Arista Records, which produced many country hits including “A Little Bit Of You” (#1 hit); “What Kind of Fool Do You Think I Am” & “Tender Moment” (#2 hits), and four other Top 10 hits:  “Love Without Mercy,” “On The Road,” “I’m Holding My Own,” and “Heart’s Desire.” Parnell has earned two GRAMMY® Award nominations for his instrumental tracks, “Cat Walk” (with Flaco Jiménez) and “Mama, Screw Your Wig On Tight” and was nominated for the CMA Vocal Event of the Year on “John the Revelator” (with The Fairfield Four).

Parnell offers, “I love many different styles of music…but for me it all goes back to The Blues. Blue-Eyed Soul, Jazz, Rock n Roll and Country all have the same Daddy and that Daddy is The Blues. As long as it’s soulful, I’m in. Muddy Waters was right — ‘The Blues had a baby and they called it Rock n Roll!’

Midnight Believer, Parnell’s new album, encompasses a realized vision that reflects the cumulative essence of who Lee Roy Parnell is today. Parnell produced the album and co-wrote all 10 songs with award-winning songwriter Greg Barnhill, including the poignant, yet hopeful “Sunny Days,” which features a special guest appearance by The Fairfield Four. He states, “One of the best things about gaining some maturity is you finally find out ‘Who You Is and Who You Ain’t.’ That said, I’d have to say that the song ‘Too Far Gone’ best describes me as an artist, now. It’s clearly a Blue-Eyed Soul ‘Beat Ballad’ as Barry Beckett (of The Muscle Shoals Rhythm Section and my first producer) would call it. Barry really taught me how to make records. He taught me about groove, soul, vocal delivery and how to make every note count! The message here is in life and love we ebb and flow. We have good days and tough days. What counts is going the distance (or at least as far as you can.) I would be remiss not to give credit to ‘Sunny Days.’ That song is a real gift. The message is one of survival. ‘At least I lived long enough to know, that the rainy days, they make the flowers grow.’ It took me a long time to get that vocal…not because it was too ‘range-ey’ but because the lyric really hit home for me, and I’m not alone. I have countless people come to me after we’ve done a show with tears in their eyes saying, ‘Man…that song slayed me!’ I reply, ‘I know…me, too.’”

Parnell has received widespread acclaim as a guitar slinger. (Gibson has honored Parnell with the creation and production of the Lee Roy Parnell Signature ’57 Les Paul Goldtop guitar, modeled after the only guitar Parnell owned from the time he was 15 years old until he was well into his 30’s.)  Musically, Parnell presents some of the best performances of his career on Midnight Believer. He approached this release with the intention of letting the music and performances speak. There is a level of organically-delivered emotion through his playing that took the path of not over-producing every track. He reflects, “Well, it’s funny…most folks think of me primarily as a slide guitarist, and to some degree that is true, but I played ‘regular lead guitar’ long before I played slide. On the song ‘Hours In Between’ what you’re hearing is one continuous lead guitar track from me…one pass going down with my band and no fixes. Not to say I didn’t want to, but they all threatened to walk out on me if I did! Looking back, I’m glad I didn’t get the chance to fix anything.”

On the songwriting side, Parnell collaborated solely with Greg Barnhill on the record, co-writing all 10 of the tracks together. ( In 2011, Parnell was presented with his most cherished honor: being inducted into the Texas Heritage Songwriters’ Hall of Fame, joining the likes of such talented composers as Kris Kristofferson, Rodney Crowell, JD Souther, Willie Nelson, Guy Clark, and others.)  Parnell offers, “When Greg came to me with the idea of us getting together to write, I was experiencing something of a dry spell. I hadn’t written anything in months and hoped the fog would lift but when you’re in a dry spell you always wonder, ‘What if the words don’t come…where is my ability to come up with fresh musical ideas?’ Greg saw through all that, lit a new fuse and just like that, we were off to the races. The songs were literally coming faster than we could write them down. Sometimes you just need a little help from a friend, and I certainly got lucky with Mr. Barnhill’s enthusiasm and encouragement.”

From the start of his career through today, Parnell has approached all aspects of his life with a keen sense of protecting his integrity. During his storied career, Parnell has toured/collaborated with many music legends including The Allman Brothers Band, Merle Haggard, Delbert McClinton, and Bonnie Raitt.  He offers, “The people I most respect and relate to musically or in life have been people who stood up for what they believe in and stuck to their guns, no matter what. I guess I’m what could be considered a ‘lifer’ and in it for the long haul. I’m still growing and developing with every year, every album, every song. I am what I am because of what I have experienced and survived. What tomorrow brings will be as much a surprise to me as whoever is reading this. Mine has not been a fast nor an easy walk, but I wouldn’t change it. I am who I am today because of every road I’ve traveled. Anybody who knows me well will tell you that.”  Parnell continues to live every day with the mantra to keep on keeping on, producing material and playing shows he is proud of. He reflects, “Only now do I feel like I’m truly hitting my stride. Lifers don’t quit, you know. I’d like to keep making a record every 18 months of so… record with some friends of mine again. I want to keep making music that comes straight from the heart.”