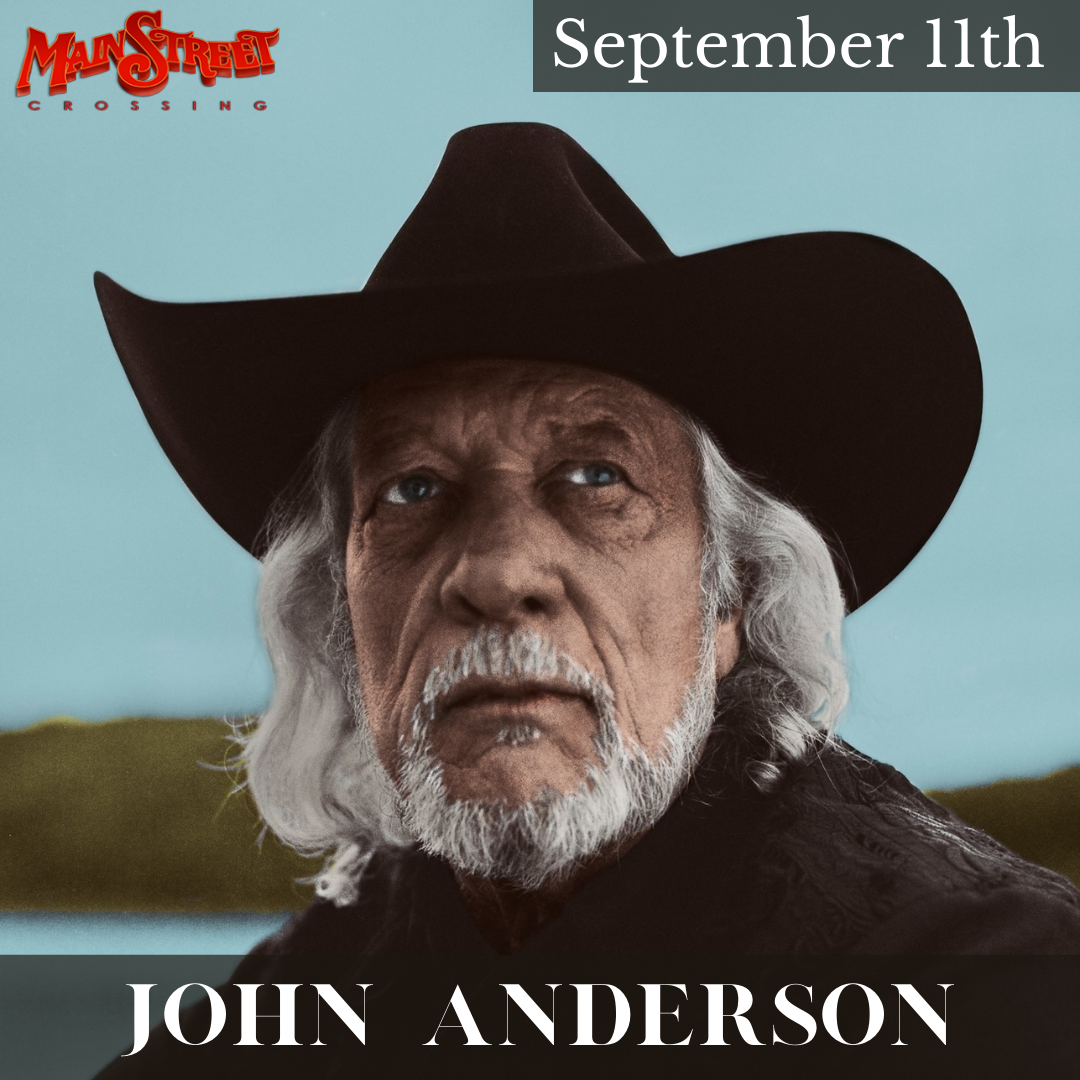 We are so excited to welcome John Anderson to Tomball, Texas to perform on the Main Street Crossing stage. What an honor it is to host you for a live concert with an artist up-close. Buy your tickets and read a little more about John Anderson below.

John Anderson pushed himself to complete his vocals for Years, telling producer Dan Auerbach, “Let’s get everything because I might not wake up.”

It’s not an overstatement. In a risky procedure a few months earlier, when anesthesia was used, Anderson was told by doctors that he’d died on the operating room table. His wife told him that it had happened three times. That knowledge weighed heavily on the legendary country singer while writing and recording Years because he knew that his next appointment – just a few days after the sessions — would require the same anesthesia.

Remarkably, Anderson kept his health crisis a secret from his touring band and the music industry, and even now he prefers not to get into all of the details. However, his recovery has become his testimony.

“There’s a few things that I came out of this whole deal better with,” Anderson says. “Part of it is my love for music and part of it is my appreciation for my family. But the biggest part is knowing that I might die here any minute, for who knows what reason, but I know that the good Lord already came down and touched me. There’s not a doubt in my mind.”

During his health scare, he’d lost his sense of pitch and even his ability to recognize his own songs on the radio. At one point, his hearing left him with what he calls “terrible noise,” forcing him to come off the road for the first time in 40 years.

As a child growing up in Apopka, Florida, Anderson remembers humming along to the tone of his father’s boat motor. He started his music career performing solo around Florida before moving to Florida. He worked in construction – he was on the roofing crew for the new Grand Ole Opry House – before landing a contract with Warner Bros. Records.

After charting modestly in the late ‘70s, Anderson scored No. 1 hits in the ‘80s with “Wild and Blue,” “Swingin’,” and “Black Sheep.” After a brief career lull, he staged a major comeback in 1992 as “Straight Tequila Night” became his first No. 1 single in nine years. That momentum carried him into the 2000s, giving him 60 charting country singles in four consecutive decades.

“As a musician who lived this way, this job has always been so easy and so natural,” Anderson says. “I always have thanked God for never having to work, what I called work. I didn’t have to work too hard at it. It was a great way of living for me — and then it went away.”

Married since 1983, with two daughters, Anderson leaned on his family to push through. For a year and a half, though innumerable doctor’s visits, he fought on a daily basis to heal. He remembers at his most desperate moment, he stood in the front yard of his acreage, let the rain wash over him, and told God, “I don’t really know how much more I can deal with. Please help.”

Looking back at that moment, he says, “It was a matter of 48 hours I started getting better. And I’m telling you, I’m not here to be anything other than what I am, but the biggest thing I’ve gotten out of my whole experience is knowing how real my faith is.”

During his period of recovery, Anderson got a phone call out of the blue from Auerbach, who was simply calling as a fan, inspired by a conversation with David Ferguson (co-producer) about great singers. When Anderson later met them both in person at Auerbach’s Easy Eye Sound studio in Nashville, they clicked as a unit immediately. On the spot, Anderson – a Nashville Songwriters Hall of Fame inductee — accepted an invitation to write the next day.

That first co-write yielded “Years,” an emotional centerpiece of the album sung from the perspective of a man with some miles on him. “I recall thinking to myself, ‘This is a pretty good song,’” Anderson says. “But we know there’s a lot of good songs that get written, and a lot of them never get heard. Nevertheless it was off to a good start.”

Auerbach kept setting writing dates with collaborators like Joe Allen, Pat McLaughlin, and Paul Overstreet. At Anderson’s request, Auerbach sang the work tapes. Instantly recognizing the caliber of the songs, Auerbach offered to make an album with studio players like Gene Chrisman, Dave Roe, Russ Pahl, Billy Sanford, and Bobby Wood. Although he had produced or co-produced his own albums since 1981, Anderson put his trust in Auerbach.

“I booked the session and here I’ve got a room full of musicians, and I really didn’t know if he was going to be able to hear in the headphones,” Auerbach remembers. “But we got him behind the microphone, he started singing and it was pure magic. His voice is like caramel magic coming out of those speakers.”

Listening to Anderson’s vocals on Years, it would be impossible to guess that anything was amiss. Delivered in that distinctive, rich baritone, “Celebrate” provides a perspective of gratitude while “Slow Down,” “All We’re Really Looking For” and “You’re Nearly Nothin’” are some of the most eloquent love songs he’s ever recorded.

Meanwhile, “I’m Still Hangin’ On” conveys the realities of a soldier living with PTSD, while “Tuesday I’ll Be Gone” – a breezy duet with good friend Blake Shelton – captures the joy of just getting away from it all. The rambling vibe of “Wild and Free” and irresistible rhythm of “What’s a Man Got to Do” feel like they’ve been in Anderson’s repertoire all along. Beyond Years, the sessions also yielded a rewarding new friendship between the artist and producer.

“John will sing it as many times as you want. He wants it to be great, but the thing is, once he starts singing, it’s almost right there, right from the first lick,” Auerbach says. “I feel incredibly lucky that I even had to the opportunity to make a record with John Anderson, let alone have all this meaning to it.”

Anderson adds, “We went in the studio, and I remember saying, ‘I’m going to do this like it might be my last.’ It still could be, but now the chances of that are getting slimmer and slimmer every day. I’m doing better so I’m not hardly thinking that way anymore. That’s a blessing, too.”