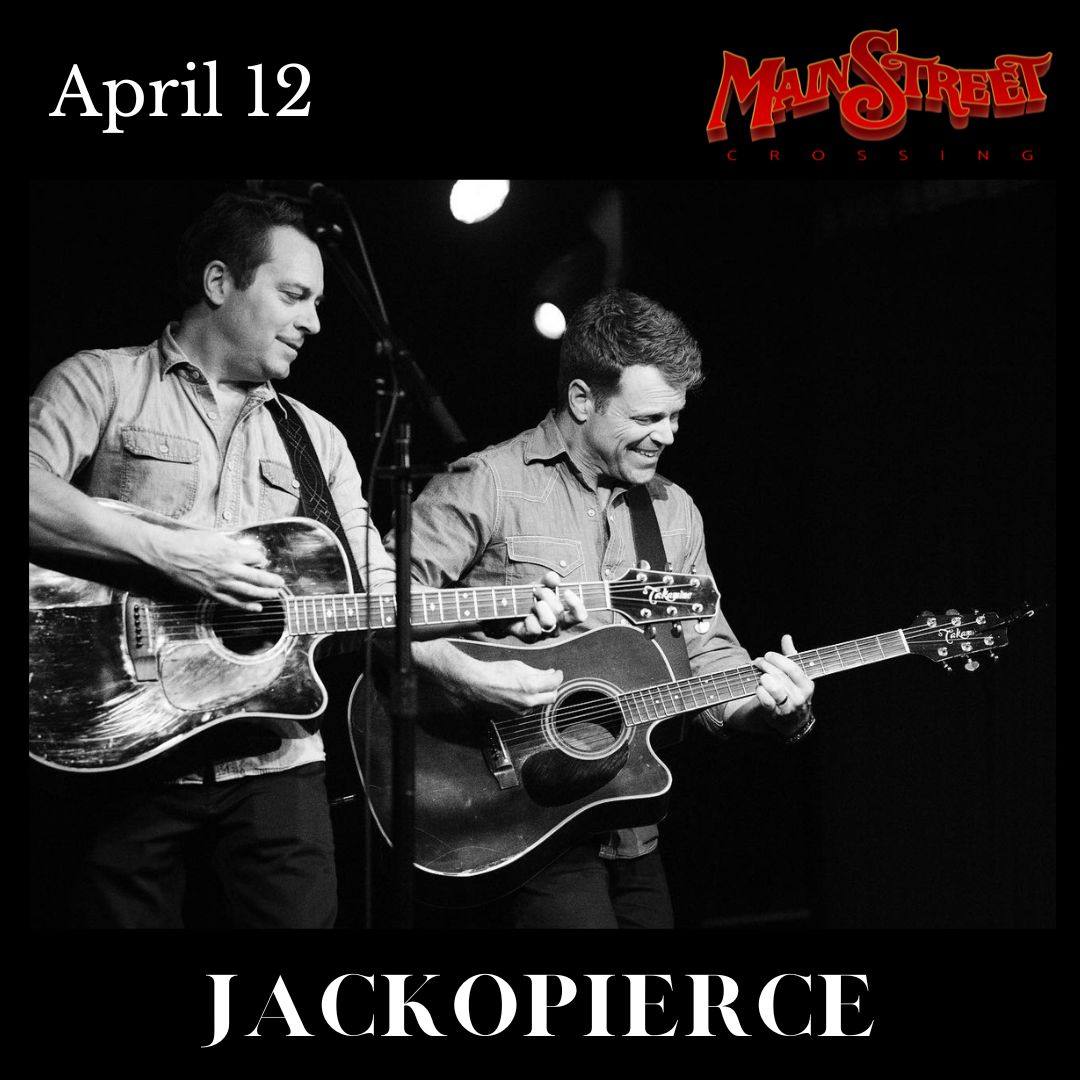 We are so excited to welcome Jackopierce to Tomball, Texas to perform on the Main Street Crossing stage. What an honor it is to host you for a live concert with an artist up-close. Buy your tickets and read a little more about Jackopierce below.

JACK O’NEILL AND CARY PIERCE, THE “JACK O” AND “PIERCE” WHO MAKE UP THE SEMINAL DUO JACKOPIERCE, ARE CELEBRATING 30 YEARS OF MAKING MUSIC THAT HAS AMASSED A LOYAL FOLLOWING OF MILLIONS OF FANS ACROSS THE COUNTRY AND THE WORLD WITH A SUPER HIGH-ENERGY LIVE SHOW AND WHAT THE DALLAS MORNING NEWS HAS CALLED “SPOTLESS HARMONIES.”

Having just released their first studio project ‘Feel This Good’ in 5 years, Jackopierce is poised and ready to get back on the road full-time.

Jackopierce formed in 1988 in Dallas as theater students at SMU. The duo steadily made a name for themselves, especially with two of their signature tracks, “Vineyard” and their version of the classic “Please Come to Boston.” They released ten studio albums (two for major label A&M), toured three continents, nine countries, and 45 states – amassing millions of loyal fans along the way . Over the years They have shared the stage with John Mayer, Dave Matthews Band, Matchbox20, Counting Crows, The Wallflowers, Sheryl Crow, Toad the Wet Sprocket – to name a few. After a five-year breakup, the guys reunited in 2002 to test out the waters. They were very warm and city by city, Jack & Cary got back out there to play for grateful fans that thought they would never see them again. The two now have a totally renewed creative vigor, mutual respect and deep gratitude for their fans.

These good vibes shine through on their 25th anniversary live album “Live 25.”

It’s definitely been a creative time for the duo, and celebrating the past inspires the guys to move forward in new, inventive ways. To freshen up the live show, Jackopierce started creating uniquely intimate “Destination Shows.” These shows are a whole new fan experience where people can enjoy gorgeous scenery, share delicious food & wine and have “campfire”- type access to their favorite band. It’s a vacation and concert in one. Each Destination Show provides a unique experience dedicated to the local culture: Napa/Sonoma vineyards at sunset, a ranch in Austin Hill Country, high society in Dallas, a two-mile-high a private club in Aspen, amazing history at the Biltmore in NC, a 14,000 square foot hacienda in San Miguel de Allende, MX – and the list goes on. July 27, Jackopierce will host their first 7th Destination Show in Martha’s Vineyard and they’ll be back for their fourth annual Destination Show in San Miguel in April 2020.

“We have been doing destination events for 10 years now and they have been a huge hit with our fans and have allowed us to make so many great new ones along the way,” said Cary Pierce. “I think these events continue to grow and sell out because people want more than “just a show” – they want an experience. They want to create lasting memories, explore a new place or visit an old favorite. In some cases, we’re offering them a trip of a lifetime. We’re finding there a lot of people that really value these experiences.”

Jackopierce has celebrated numerous career milestones including the T-Bone Burnett produced A&M debut album “Bringing on The Weather,” being a part of one of the world’s largest live events with close to 400K people in attendance at the 1997 Blockbuster RockFest at Texas Motor Speedway alongside artists No Doubt, Counting Crows, and Matchbox Twenty, performing on Conan O’Brien in 1992 with the Max Weinberg Band backing them up and sitting in the chairs on the Rosie O’Donnell Show.

“Even after 30 years I feel like we’re just getting started,” said Cary Pierce.