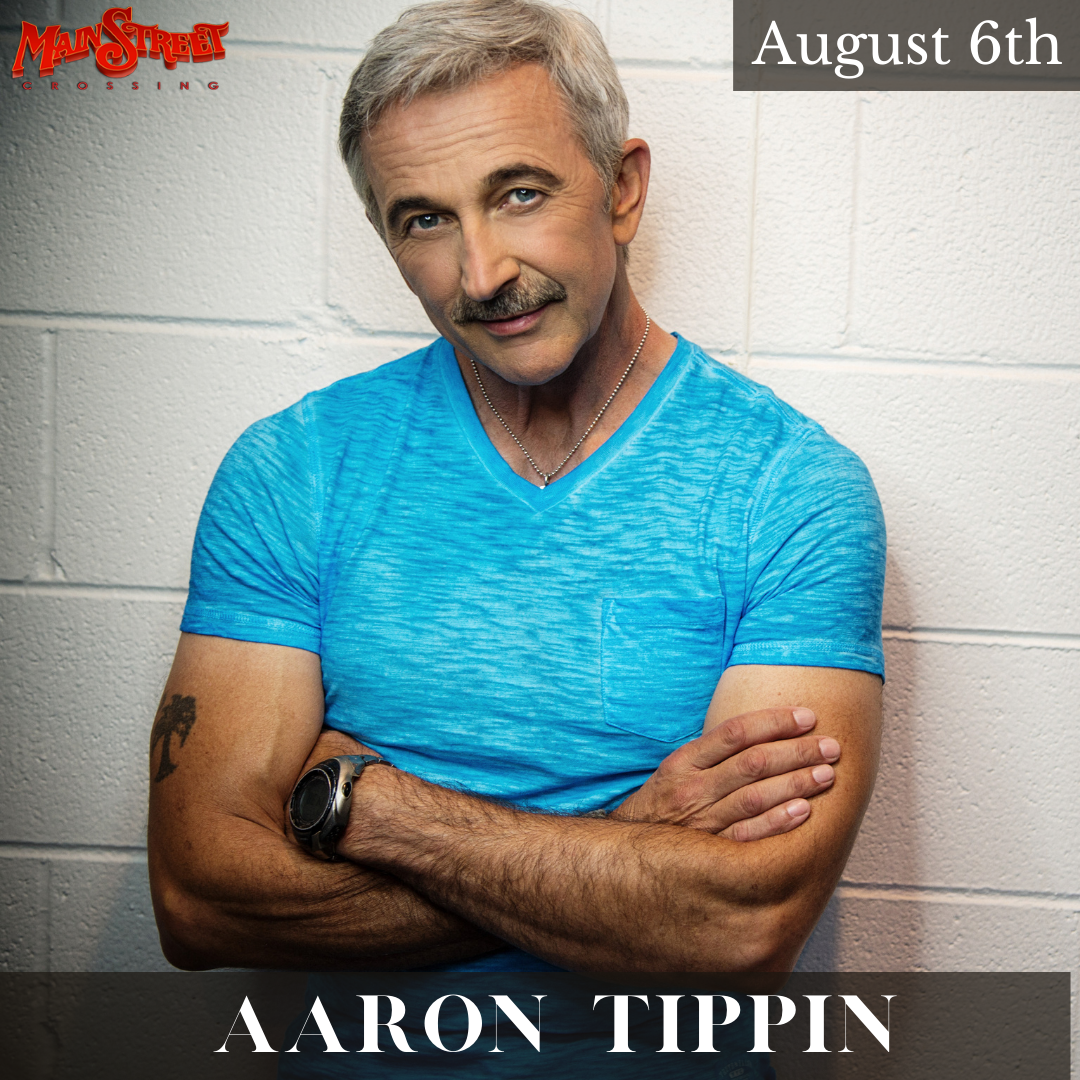 We are so excited to welcome Aaron Tippin to Tomball, Texas to perform on the Main Street Crossing stage. What an honor it is to host you for a live concert with an artist up-close. Buy your tickets and read a little more about Aaron Tippin below.

Twenty-Five years – a huge career accomplishment, especially in the music business. Aaron Tippin – who marks his silver anniversary as a recording artist this year – admits that he looks at his career longevity with a little bit of amazement.

“I think about it and go ‘Wow. What am I doing still here?’ I look at the flight that we took off in,” referring to his fellow newcomers at the time of his career launch. “A lot of them are gone, it seems. Some quit by choice. Some ran out from under it, but to be here twenty-five years doing it, I am the luckiest hillbilly that ever lived.”

Tippin says that nobody was any more surprised that he got an invitation to join the roster of Nashville powerhouse RCA back in 1990 than him. In fact, at the time he inked his deal, he had almost given up hope of success as a vocalist, concentrating on his budding career as a songwriter – with cuts from the likes of The Kingsmen, Mark Collie, and Charley Pride.

“I thought my chances were gone. I came to town when I was about twenty-five years old. I had been seriously trying to get a record deal for about three or four years. I just thought ‘Man, this ain’t gonna happen.’ I really had settled into songwriting, and my songs started to get recognized. One of the gals down at RCA – Mary Martin heard me singing my demos. She said ‘Who is that?’ They said, ‘That’s that Tippin guy down there who writes for Acuff / Rose – the muscle guy.’ She said ‘That’s hillbilly. That’s country. Let me hear what else he’s got. I want to meet him.”

Aaron recalls that walking into the RCA office to meet with label head Joe Galante definitely had a magical vibe, as well it should. “The label was on fire. Clint Black was on top of the charts, along with the Judds and Keith Whitley. What a great team to fall into there. I’m so thankful that Joe took a chance on me. It sure worked out, and I had a great run there. I remember when he sent me my plastic Nipper dog and my Varsity Jacket. I couldn’t believe it.”

He also couldn’t believe that his first single, “You’ve Got To Stand For Something,” hit the Billboard Country Singles chart – eventually peaking at # 6. The success of that record also brought him a career opportunity that completely blew his mind. “When the song started to get played in Los Angeles, we got a call from Bob Hope’s daughter Linda. She heard the song, and asked if I’d be interested in going over and entertaining the troops. It didn’t take him long to give her an answer. “I said ‘Are you kidding me? Bob Hope? I never in a zillion years dreamed I would be on the Bob Hope show.”

And, just like that, Aaron Tippin was off to the races. The hits continued to pile up – “There Ain’t Nothin’ Wrong With The Radio,” “My Blue Angel,” and “Workin’ Man’s PhD,” among them. He was building his brand on songs that touched a nerve with his blue-collar audience – and that one of a kind vocal style that definitely was Country. “You either liked it or you hated it. I is what I is,” he says with a smile. “I think several times during my record career, we tried to change and follow trends and stuff. But, it never seemed to work for me. The most success I had in the business was with songs that I crafted. I’m very proud of that. I think it makes a fan able to identify with me easier because these songs are about me – my life, who I am, and how I was raised. I tell people I get recognized a whole lot faster in a truck stop than I do in my tuxedo walking into the back of the Opry. You better check my credentials when I have a tuxedo on, because it don’t look right.”

That’s not to say that Tippin was a one-trick pony. His 1995 smash “That’s As Close As I’ll Get To Loving You” showcased a more dramatic side to his vocal approach, something that continued into his next label affiliation – as the flagship artist for Lyric Street Records.

“Everybody saw that with ‘That’s As Close As I’ll Get To Loving You’ that I could do other things. So, when they were pitching songs to Aaron Tippin, it was with a lot broader range. A lot of times, it would be songs that I particularly couldn’t write. It was a new place for my career, and to kick things off at a new label – I think it was a big success,” he recalls of “For You I Will,” his debut single for the label.

Signing with Lyric Street was like a family reunion for Tippin, with many people he had worked with before – such as Greg McCarn, Randy Goodman,Doug Howard, and Kevin Herring, as well as promotional guru Dale Turner – who had helped to build the Tippin brand at RCA. “I was happy to be one of the first people they signed. I enjoyed my time there as well.”

Another important piece of the Tippin story is his wife – and business partner Thea. “She is as much Aaron Tippin as I am,” he says. “She’s only six months behind me in my record deal. I signed with RCA, and then six months later, I signed with Narvel Blackstock and Trey Turner. She was Trey’s assistant, so she started working the Aaron Tippin career six months after it started. She’s got as much stake in this game as I do. She saw me at my lowest days, stood right there and stayed – even when things weren’t great, and I wasn’t having hit records. She listened to me whine all through it all. I owe her everything.” It’s not just his 25th anniversary as a recording artist in 2015 that Tippin is celebrating, but also his and Thea’s 20th anniversary as husband and wife, as well. Family is the center of Tippin’s universe – with two teenage sons, Ted and Tom, a grown daughter, Charla, and a granddaughter.

As the new millennium dawned, Tippin returned to the top  of the charts with “Where The Stars And Stripes And Eagle Fly,” a song that became part of the American soundtrack during the aftermath of 9/11. “I wanted to talk to Americans about who we are at heart, and the fact that when the going gets tough, that’s when we really stand up. We may have a lot of differences when everything is calm and fine, but when it hits the fan, I think we’re the best in the world at sticking together, and rallying around the cause. That song served that purpose very well. I wanted us to be proud as Americans, and get back on with living free.”

In the past decade, Tippin has recorded several musically diverse projects – including a well received 2009 truck driving album, In Overdrive. He also partnered with restaurant chain Cracker Barrel for the release He Believed. To celebrate his 25th anniversary making records, he plans to celebrate in a big way. “We’re looking at putting together a project that has ten old songs, ten new ones, and five recordings that you never thought you would hear Aaron Tippin do. We’ll probably do some big band stuff, like “The Way You Look Tonight” – that’s a song I love. Thea and I love Frank Sinatra, Dean Martin, and Tony Bennett. Her dad was a jazz and big band guy. That was our dance song at the wedding. I would also love to do a little bit of bluegrass – most people probably don’t know that I came from bluegrass back in Traveler’s Rest, SC, where I grew up. Nobody’s ever heard me do any Gospel, so this gives me a chance to do that. I grew up in the south, so southern rock is big in my world. I’d like to take a shot at some of that. I don’t know what the fifth cut is going to be. We’ve got the hits cut, and we’re fine tuning the new ones. We just want to make sure that it’s everything I want it to be, It’s important to me, because I don’t know if I will make fifty years or not!”

And, of course, another place where Aaron Tippin will be celebrating such a notable milestone is on the road. The singer still delights in that hour and a half performing on the stage – and those who come out to see him. But don’t call them “fans” – he thinks of them as family. “They have been so great to me over the years, and they’re still coming out to the shows. That’s why I still sign autographs every night. I just want to get out there and shake their hand and give them a big hug – just to say thank you. They’re not strangers anymore – they’ve been coming for twenty five years.”

The Aaron Tippin 25th Anniversary Celebration promises to be an unforgettable year of music and fun – After all, he ‘wouldn’t have it any other way,’ would he?