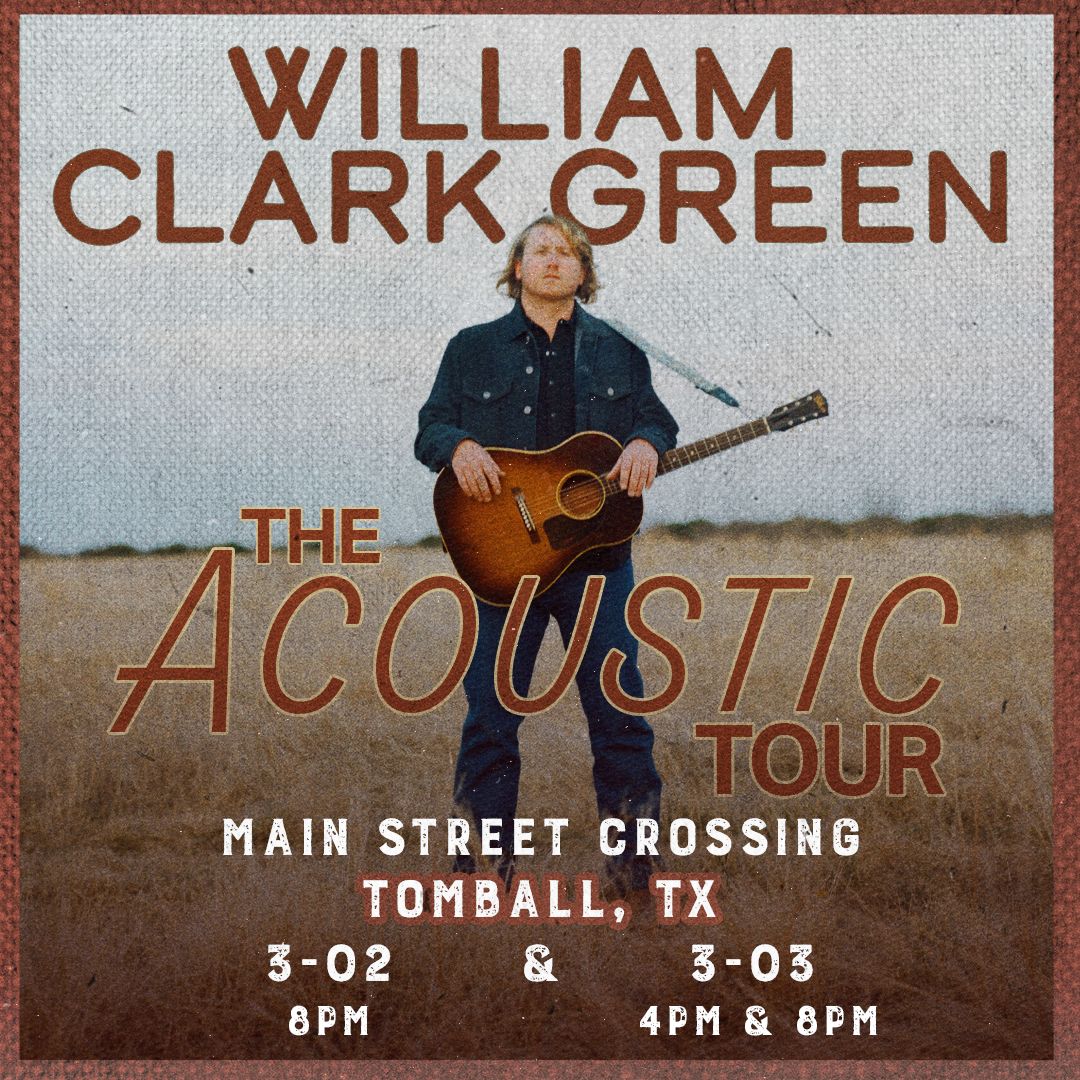 We are so excited to welcome William Clark Green to Tomball, Texas to perform on the Main Street Crossing stage. What an honor it is to host you for a live concert with an artist up-close. Buy your tickets and read a little more about William Clark Green below.

In the proudly independent Texas-country scene, it’s not easy to separate yourself – or to evolve once you have. But for almost 15 years, William Clark Green has done both with a nod to his home state itself, both rooted in the past and barreling toward the future.

Boasting sandpaper vocals and country-rock sound at the crossroads of back-alley grit and gravel-road grace, the Flint, Texas, native emerged like many others before – sauntering out from Lubbock’s live music loving college-bar scene. But he has since carved a space that is uniquely his own. Pairing singer-songwriter tradition with a progressive musical mindset, he’s both a troubadour of troubled souls and maestro to lyrical mischief, renowned for underdog anthems filled with sardonic wit, vivid characters and even historical curiosity.

Over five previous albums, multiple Number Ones on Texas Regional Radio have joined iTunes Country Album chart toppers, the respect of critics and peers and a vibrant touring profile anchored on Texas’ biggest stages. But even after so much success, two years of treading water left Green looking to get beyond his comfort zone.

“My whole mentality is that if my voice went out tomorrow, or I lost my arm and my career ended, I’ve got nothing but gratefulness,” Green explains, flashing his signature sense of dark humor.“But in some ways, we wanted to reach and see what else is out there. I think the band is ready, I think I’m ready, and it’s not really about money or anything. It’s about feeling that high again, feeling that new-ness.”

Returning with Baker Hotel, his sixth studio album and first in almost four years, Green goes after that new-ness with an open mind, and the thoughtful approach of roots-rock poet. Just as each album before it, he continues mixing Lone-Star mythos into his storytelling, this time occupying an abandoned monument to the past in Mineral Wells, Texas. But as he hinted above,Baker Hotel takes his craft to new heights. Even for an artist who’s fans expect the unexpected, it finds Green raising his game to the proverbial penthouse suite.

Featuring 13 tracks and the return of producer Rachel Loy (Rose Queen, Ringing Road), the set taps everything from lush ‘80s pop to classic highway rock and traditional Western balladry, as Green seeks out new sonic connections – and probes deeper into his soul than ever. The set arrives after a grueling 2019 tour which featured more than 170 shows, then the isolation of a pandemic shutdown, and it’s that push and pull of burnout, creative detox and almost-meditative rejuvenation that drives the project – all captured through the eyes of a dead panning interstate philosopher.

“Songwriting is such a weird deal for me, because everything I write about is true,” Green admits. “What this record means to me is self-reflection, realizing that I just turned 35 and it’s like ‘Where am I at in life? Where do I want to be? Where did I think I would be?’Not being able to work, I had a lot of time to sit and think about myself, and what’s really locking me down, and that’s what I think this record is about.”

The title track best captures the dual nature of that growth. Waiting until early 2021 to record, Green gathered a small group in his guitar player’s Texas home studio – his first in-state recording since 2010’s Misunderstood– and they simply let the spirit move them.

Co-written by Green with Ross Copper and Dean Phillips, “Baker Hotel” checks in with a classic dose of historic whimsy, landing squarely in the vein of much-loved adventure anthems like “Ringling Road.” But then it builds on precedent, adding in a strutting rockabilly groove.

Now dilapidated, but still towering 14 stories over Mineral Wells, the real-life Baker Hotel was once among the nation’s most illustrious, hosting everyone from Bonnie & Clyde to Marilyn Monroe and Ronald Regan. Green’s tribute likewise toasts the local tradition of sneaking in and climbing to the top, and with plans to revitalize it underway, his spooky-roots barn stormer salutes the past as a new age arrives.

Elsewhere, however, Green’s not working off any playbook at all. Recording freshly written songs, sometimes penned just the day before, Green and his team felt free to roam. Some of his most challenging vocal performances are joined by in-the-moment arrangements, including craggy country rockers drenched in steel guitar, barstool ballads and two-steppers built for packed venues all across the nation – plus orchestral strings and the fat-bottomed bass lines of daydreamy plains pop.

Each new track is almost like a different guest in the Baker Hotel itself, as Green explores themes of evolution in myriad ways.

“I think the entire COVID quarantine, it was about breaking out of chains to get back to normal on the outside, but also in an inner way, too,” he says. “It’s just a way different observation on myself and the world than I’ve ever had before.”

The high-flying “Feel Alive” may be project’s spiritual focus. Soaring with optimistic determination and a vocal that approaches the heavens, it’s the joyful sound of a soul opening up. With tracks like the confessional “Getting Drunk,” a lifelong good-timer wonders what he’s trying to drown out. And “Leave Me Alone” finds a guy arguing with himself in head spinning hill-country pop.

Meanwhile, “Dog Song” pairs Green’s sly humor with a funky, four-legged foundation and a charming romantic turnaround. “Me, Her and You” dresses a classic-Western heartbreaker in stunning strings. “All You Got” writhes with ‘90s alternative rock frustration, and “Give a Damn” shimmers like the last rays of a West Texas sunset, somehow feeling both empty and electrifying.

No, it’s no small feat to grow while staying true to who you are … and for a proud Texan, true to where you’ve been. But if the last year-plus has taught him anything, it’s that the future is uncertain – so live fearlessly and blaze new trails while you can.

“I’m so fired up to go, its ‘Like let’s see where the road leads?’” he says. “I don’t have any kind of constraints, and that is bad ass.”