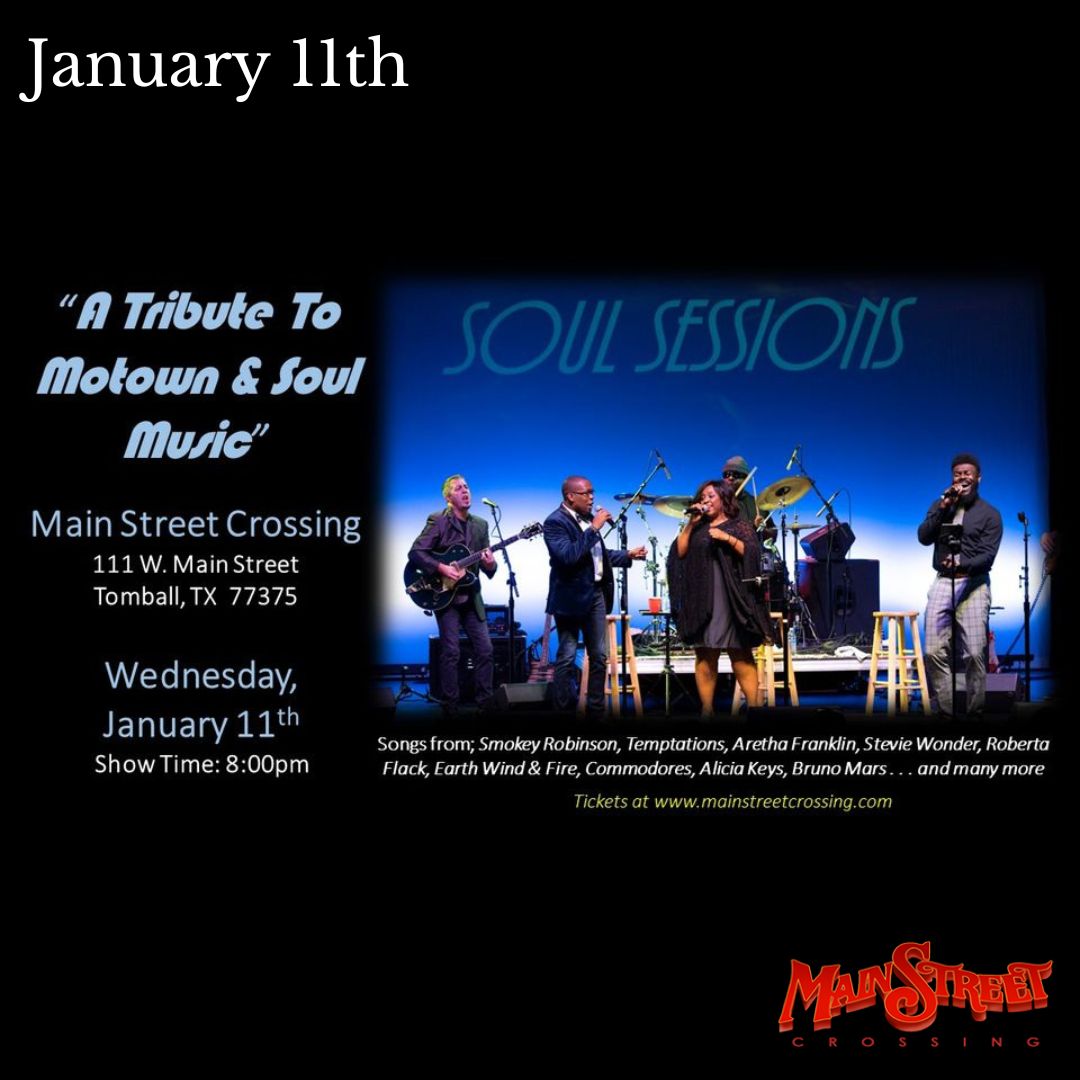 We are so excited to welcome Soul Sessions to Tomball, Texas to perform on the Main Street Crossing stage. What an honor it is to host you for a live concert with an artist up-close. Buy your tickets and read a little more about Soul Sessions below.

Soul Sessions has been bringing a unique blend of R & B, Soul and Funk music to Central Texas over the past 9 years. Soul Sessions is New Braunfels highest attended band and has been awarded by the voters of the Herald Zeitung as “Best Of the Local Live Bands” 3 years in a row. This eclectic band utilizes a rotation of over 30 of the best professional groove musicians and
most dynamic and entertaining vocalists in the Central Texas area!

For our Main Street Crossing show, Soul Sessions will be bringing their A Team; Robert Carter; Hollie Holloway on vocals, Brett Cline on keyboards, Joshua Cardena on drums, Jamie Cameron on guitar, Sean Byrd on bass, Tony Bray on sax and flute. Many of the musicians who will be on the Main Street Crossing stage have played with; The Temptations, The Four Tops, Diana Ross and, The Supremes, Lionel Ritchie and the Commodores, BB King, The Drifters and other prominent award-winning bands.

Whooo . . . Tomball, TX has not experienced this level of passionate groove music before and surely this performance will be one to remember. The audience will be guided down memory lane and enjoy singing along and dancing to some of the best Soul songs from the past to current, including songs from 60’s; Smokey Robinson, Temptations, Aretha Franklin, Bill Withers ~ 70’s; Gladys Knight, Stevie Wonder, Billy Preston, Marvin Gaye ~ 80’s; Michael Jackson, Al Green, Earth, Wind & Fire, Luther Vandros ~ Current; Bruno Mars, D’Angelo, Maxwell, and more. This iconic tribute show has out sold several superstar performers in Central Texas theatres, such as; Crystal Gayle, Jefferson Airplane, Jim Messina, Marty Stuart and other international acts. This show will prove to be quite memorable!

Let’s get our groove on!