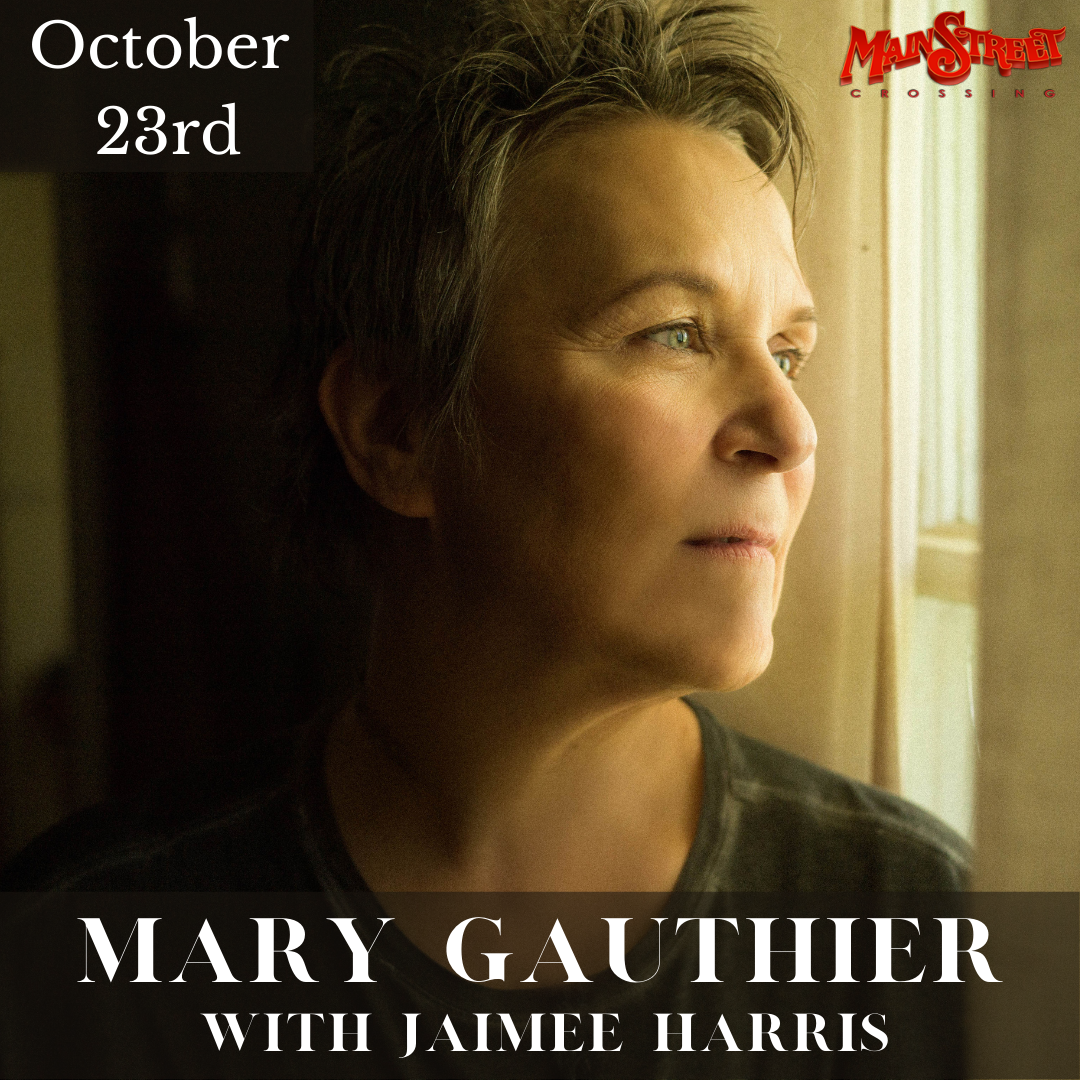 We are so excited to welcome Mary Gauthier to Tomball, Texas to perform on the Main Street Crossing stage. What an honor it is to host you for a live concert with an artist up-close. Buy your tickets and read a little more about Mary Gauthier below.

“Writing helps me sort out confusion, untangle powerful emotions, and ward off desperation. It helps me navigate the powerful emotional weather systems of life.” – Mary Gauthier, Saved by a Song: The Art and Healing Power of Songwriting

As she has so eloquently accomplished over the past 25 years, acclaimed singer- songwriter Mary Gauthier has used her art once again to traverse the uncharted waters of the past few years. “I’m the kind of songwriter who writes what I see in the world right now,” she affirms. Thankfully, amid dark storms of pandemic loss, she found and followed the beacon of new love: Her gift to us, the powerful Dark Enough to See the Stars, collects ten sparkling jewels of Gauthier songcraft reflecting both love and loss.

Gauthier’s early work, which began at 35, reflected her newfound sobriety, delving into events from a troubled life, which persisted after she became a renowned chef in Boston. Dark Enough to See the Stars returns Gauthier to the scintillating confessional mode on such albums as her breakthrough release, 2005’s Mercy Now, as well as such ear worms as the hook-laden “Drag Queens in Limousines.” In addition to crafting instantly memorable songs, Gauthier has never shied away from difficult self-exploration, as with 2010’s The Foundling, on which she explored the repercussions of her adoption from a New Orleans orphanage and subsequent search for her birth mother.

On Dark Enough to See the Stars, she mourns recent devastating losses: the deaths of John Prine, David Olney, Nanci Griffith, and her beloved friend Betsy. But she also sings open-heartedly of love. All ten tracks prove Gauthier’s belief, as stated in Saved by a Song, that “songs can bring us a deep understanding of each other and ourselves and open the heart to love.”

Deep emotion resonates throughout Dark Enough to See the Stars. “It kicks off with three love songs,” says Gauthier. “Somewhere along the work I’ve done in therapy through art and 32 years of recovery, I’ve somehow stabilized enough to be in a relationship that works – and I want to express that in these songs.” The joyous triad – the catchy “Fall Apart World,” the lilting ballad “Amsterdam,” and gospel-tinged “Thank God for You” – each punctuated with Danny Mitchell’s evocative keyboards – comes alive with poetic imagery.

“Thank God for You” contrasts her former life – “another junkie jonesing on a Greyhound bus” – with the state of grace she’s found. Lush instrumentation perfectly underpins the anthemic “Fall Apart World,” which Gauthier calls “adult music.” While on a writing sojourn in Key West, she explains, “It’s understanding that things come together and things fall apart. The awareness of that is an opportunity for gratitude. Right now, I’m looking out the window – and I can’t believe I get to be here! I don’t take it for granted for one millisecond!”

Gauthier’s partner, Jaimee Harris, who sings harmony throughout the album, co-wrote the paean to one of Gauthier’s favorite cities. “I have a long history with Amsterdam,” Gauthier recounts. “My first record deal was on a Dutch label, and I tour there regularly, and much of Mercy Now was written at my favorite hotel there.” A canceled flight to Denmark landed Gauthier and Harris in Amsterdam for an unexpected three days during the pandemic. “To return to that hotel and be able to share that with the person I love and show her the city…,” Gauthier pauses. “It’s complicated – because all around the edges was the pandemic. But you’ve got to express your joy – a joy that’s not free from pain. There’s grief all around us, but there’s this ability to still love and still be aware that the sky is beautiful and the hand that I’m holding is filled with love…”

The album’s bittersweet title track, “Dark Enough to See the Stars,” cowritten with Beth Nielsen Chapman, resonates with that very same emotion. “When things get really hard and the walls are closing in and it starts to get dark, you realize what really matters,” Gauthier says. “And what really matters, of course, is love. Even though my friend Betsy is gone, I get to hold on to her love. And I get to hold on to the love that John Prine showed me, and Nanci Griffith and David Olney. It occurred to me while working on the title track that love didn’t die with them. That was a gift that was given to me that I get to keep.”

As on the memory-rich track, “The Meadow,” Fats Kaplin’s haunting pedal steel guitar expresses the sonics of fleeting time, a theme Gauthier explores on one of the first songs written for the album, back in 2019. After performing in Albany, New York, the solitary troubadour found herself yearning for her newly discovered soulmate’s “candlestick fingers on my skin”: The poignant “About Time” documents that lonesome highway, while the singalong waltz “Truckers and Troubadours” acknowledges musical vagabonds’ kinship with long-haulers; in fact, Gauthier and co-writer Darden Smith collaborated with Paul “Long Haul” Marhoefer on the ear-catching lyrics. “Paul said that when Darden and I get together and start talking,” says Gauthier, “we sound like two truck drivers.”

Finally, Dark Enough to See the Stars bids farewell to Gauthier’s tragically departed friends: “Where Are You Now” paints an autumnal picture of the trails where she and Betsy roamed; “How Could You Be Gone” expresses in detail the disbelief inherent in our goodbyes; and “Til I See You Again” offers a prayer “to all those I hope to reunite with,” says Gauthier.

As throughout Dark Enough to See the Stars, all three compositions exemplify Mary Gauthier’s songwriting brilliance: They offer beauty in sorrow, healing in loss, and a perspective only an artist of uncommon generosity can give. Thank God for Mary Gauthier.