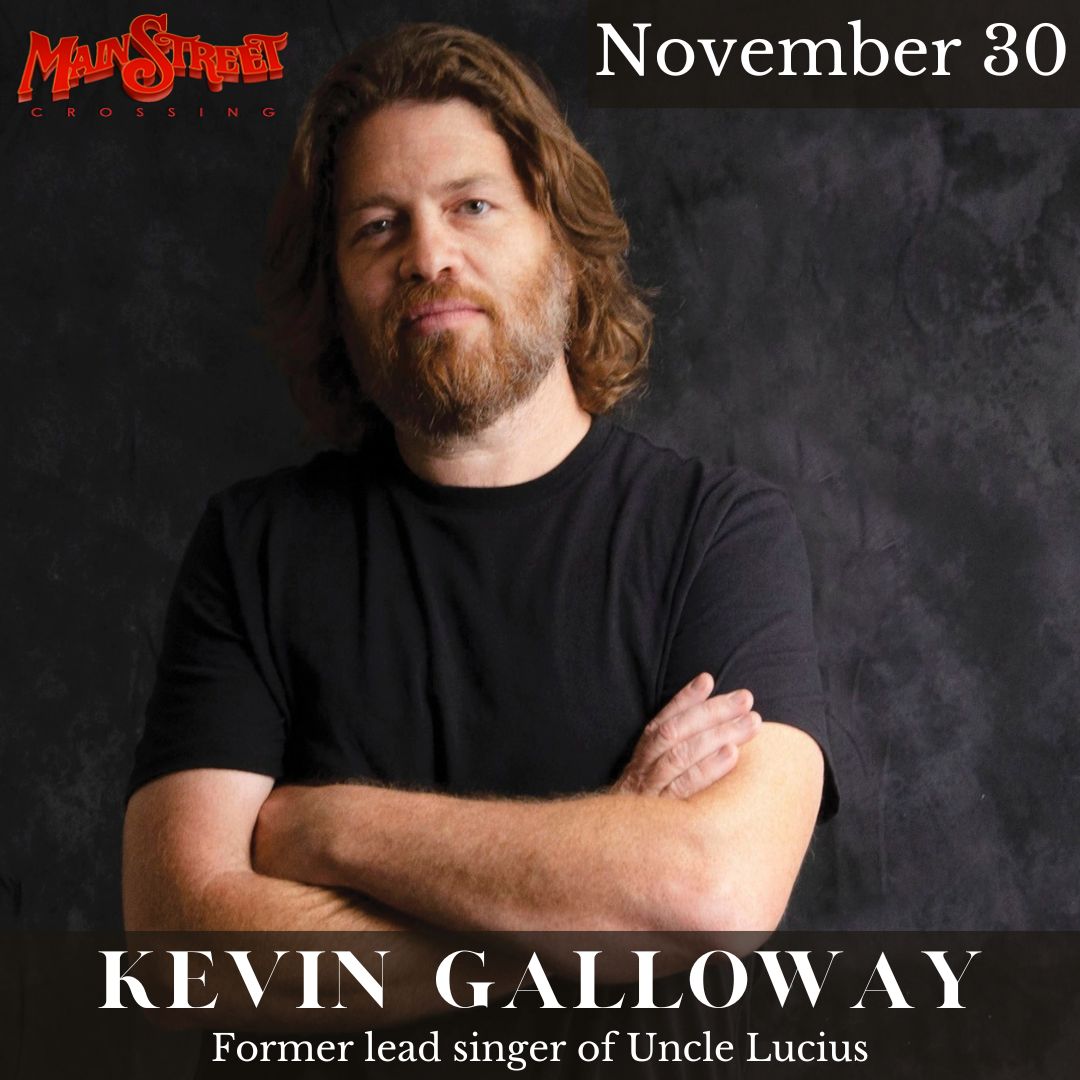 We are so excited to welcome Kevin Galloway to Tomball, Texas to perform on the Main Street Crossing stage. What an honor it is to host you for a live concert with an artist up-close. Buy your tickets and read a little more about Kevin Galloway below.

“I’m feeling pretty humbled and grateful these days,” says former Uncle Lucius frontman turned celebrated solo artist Kevin Galloway “I’m very comfortable being on my own, and I’m enjoying the more intimate shows and the opportunity to dig into the stories behind the songs. I’ve always gravitated towards songs that I can connect to on a personal level, so this is perfect for me.”

Secondhand Starlight is Galloway’s second solo album, following a productive decade-and-a-half run as charismatic frontman of the beloved Austin, TX combo Uncle Lucius. The ten-song set continues Galloway’s emergence as one of his home state’s most distinctive and compelling vocalists and songwriters, with a personally charged edge that consistently gives his compositions an effortless emotional resonance.

The Austin-American Statesman’s Peter Blackstock described Galloway as “one of Austin’s finest singers. His voice is rich, full of character and versatile; he can swing from an easygoing croon to a full-on soulful shout.” The artist has gained similar acclaim for his songwriting, with the Austin Chronicle, which noted that the artist “salves easy, country-licked melodies that contemplate gentle pleasures.”

Secondhand Starlight consolidates the creative strengths that Galloway honed in his years with Uncle Lucius. By the time they disbanded in 2018, the group had released four acclaimed albums and earned a fiercely loyal grass roots fan base, thanks to its powerful, eclectic live shows, and to such enduring songs as the hit Galloway anthem “Keep the Wolves Away” which was certified Gold by the RIAA three years after Uncle Lucius disbanded.

Throughout Secondhand Starlight, the organic emotional forthrightness of such Galloway compositions as “Not That Far Removed,” “Unavailable,” “We Row” and the infectious “Like Before” should ring a bell with listeners familiar with his work with Uncle Lucius, exploring the artist’s longstanding pet themes of love, commitment and expectation.

Secondhand Starlight, recorded at Austin’s E.A.R. Studio, continues Galloway’s productive collaboration with his former Uncle Lucius bandmate Hal Vorpahl, who handled the new album’s production, as well as contributing a pair of memorable songs, “Long As It Shines” and “Been Threw A Few.” A third non-Galloway composition is the Shel Silverstein classic “Whistlers and Jugglers,” best known for Waylon Jennings’ 1978 version.

To provide backup on the Secondhand Starlight sessions, Galloway called upon Austin’s own Doug Strahan and the Good Neighbors, local favorites led by guitar hero Strahan, whose skill and chemistry add immeasurably to the material. Adding their voices to the mix are two of Austin’s most celebrated young female singer-songwriters, Kelley Mickwee and Jamie Lin Wilson.

”I went into the studio with an ease in my approach,” Galloway reports, adding, “These tunes were recorded in multiple two or three day sessions, once a month, over an eight-month period. My initial thought was to put out an EP, but things changed when I realized how fun and rewarding the process was.

“I’d give the tunes to the band, then we’d get together and work out specifics the day before the session. It was an old-school process; we recorded everything in the room together and used the best overall takes. I’ve known the band for a few years and they’re real pros, so that made things easy and fun. Also, I branched out on this project by playing guitar and singing live with the band, which is a first for me.”

Kevin Galloway grew up in Freeport, TX, in the shadow of the chemical cooling towers that were a constant reminder of the industrial accident that had disabled and almost killed his father. Resettling in Big Sandy as a teenager, Kevin joined his college choir, took a job at the local bank branch, and spent some time as a music minister for his local church. At 25, he followed his creative muse to Austin. There, he found enthusiastic collaborators in the future members of Uncle Lucius, who soon earned a regional fan base and a reputation as one of Texas’s most celebrated and innovative bands.

Over the next few years, Uncle Lucius’ rousing R&B/blues/country – inflected rock ’n’ roll wowed live crowds across the country and established the band as local heroes in their music-savvy hometown.  But after nearly 15 years of musical success and personal camaraderie with Uncle Lucius, Galloway felt that it was time to move on and transition to a solo career. He did so, decisively, with his 2018 solo debut The Change, which expanded on Galloway’s work with his former band while echoing the tradition of  the various classic Texas troubadours whose work has inspired him over the years.

For some artists, the prospect of leaving the comfort of an established band might seem a bit reckless. But for Galloway, now a family man with a wife and two young children, making music remains a matter of survival.

“My overall outlook is less self-centered now,” he states, adding, “I’ve quite enjoyed the transition to solo work. I had gotten burned out by album cycles and the ever-spinning wheel. Now, not pushing myself constantly to keep the machine running has led to more freedom and happiness for me. And there are other advantages to solo decision-making, as opposed to an all out democracy. I’ve grown more confident in my abilities, and more mature in my handling of the ups and downs.

“I can’t really tell if my approach to the music has really changed,” he concludes. “But I realized long ago that I’m at my best when I pay attention to inspiration and feeling, and just let everything unfold on its own.”