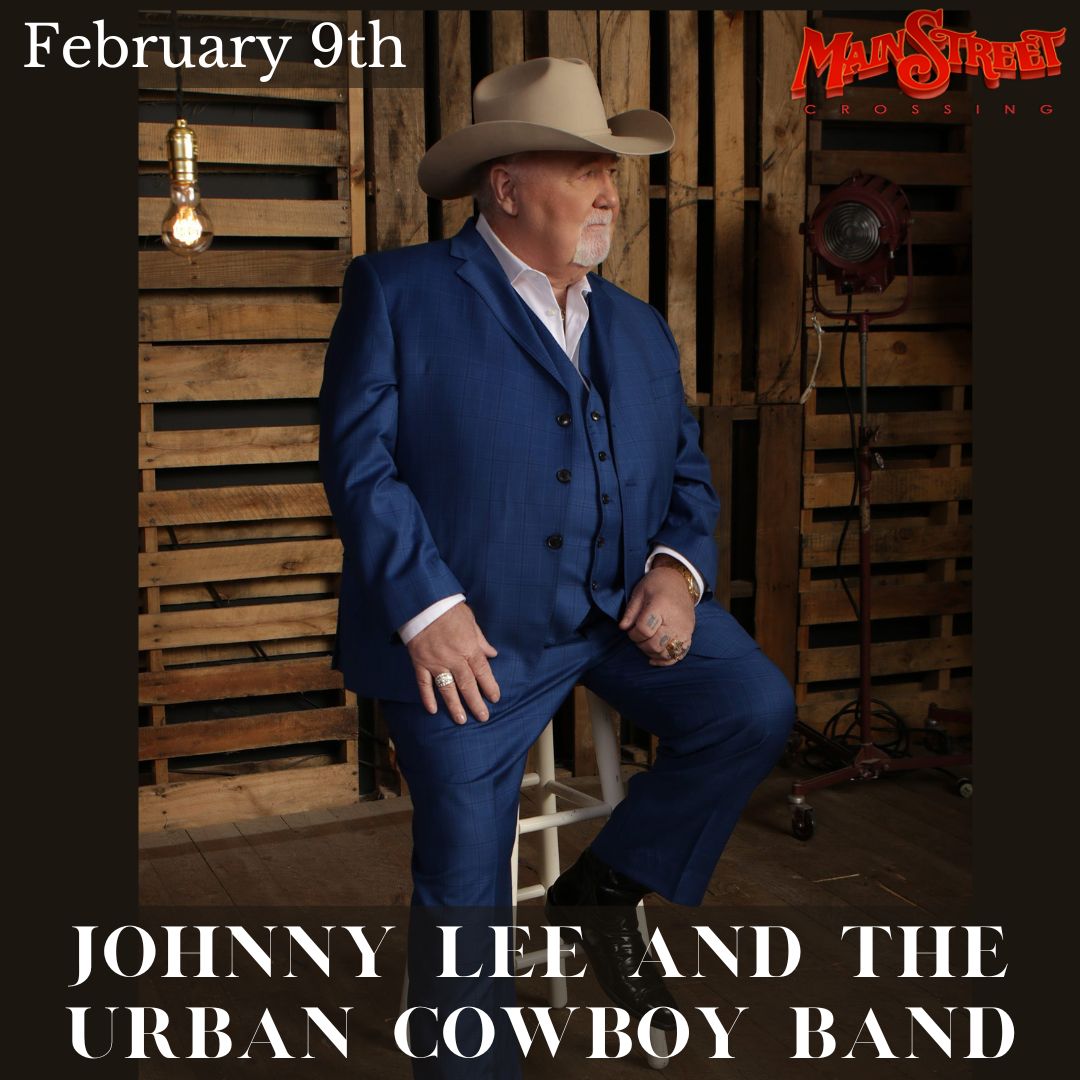 We are so excited to welcome Johnny Lee to Tomball, Texas to perform on the Main Street Crossing stage. What an honor it is to host you for a live concert with an artist up-close. Buy your tickets and read a little more about Johnny Lee below.

Johnny Lee’s breakthrough hit, “Lookin’ for Love,” helped usher in an historic era in country music, and four decades later Johnny Lee remains one of the genre’s most beloved entertainers. Possessing enviable comedic skills and a voice as warm and strong as sunshine on the Texas asphalt, Lee has enjoyed a successful career, but he isn’t near ready to call it quits yet. The proof is in his new album Everything’s Gonna Be Alright.

The 14-song collection looks poised to be a landmark album in an already impressive career, spotlighting not only Lee’s signature vocals but also his talent as a songwriter. The Texas native wrote or co-wrote the bulk of the project. “I’m more proud of this album because I wrote most of the songs on there,” Lee says. “I’m proud of the rest of my stuff too, but I’m really proud of this one because I’m the creator.”

Everything’s Gonna Be Alright is the quintessential Johnny Lee album with a diverse collection of songs ranging from the positive message of the title track and first single to the wistful romance of the tender love song “Annie” to the up tempo romp “Sawin’ on the Fiddle,” which he wrote to pitch to the late Charlie Daniels. Among the originals, the Texas Country Music Hall of Famer also puts his indelible stamp on such classics as the Leon Russell penned “A Song for You” and “Statue of a Fool,” an iconic hit made famous by the late Jack Greene. Lee recruited his longtime pal Willie Nelson to play his legendary guitar Trigger on “Did You Enjoy Hurting Me?” The album closes with the bonus track “Father’s Daughter.” Written and sung by his daughter, Cherish Lee, the song is a poignant tribute to Lee as a father and an artist.

A native of Texas City, Texas, Lee grew up on a dairy farm and formed his first band in high school. Following graduation he enlisted in the Navy and served on the USS Chicago, a guided missile cruiser. “When I first got out of the military, I was going to be a cop out in California,” Lee recalls. “I took all of the tests and passed everything, but then I got in an old Chevy and drove back to Galveston, Texas.”

Lee began performing on the Lone Star state’s competitive nightclub circuit, and began working with Mickey Gilley in 1968. He performed with Gilley on tour and at Gilley’s legendary club in Pasadena, Texas. The 1980 film Urban Cowboy, starring John Travolta and Debra Winger, was set predominantly at Gilley’s and Lee performed three songs on the multi-platinum selling soundtrack—“Rode Hard & Put Up Wet,” “Cherokee Fiddle” and “Lookin’ for Love,” which topped the Billboard Hot Country Singles chart for three weeks and became a crossover hit, peaking at No. 5 on the Billboard all genre Hot 100.

Urban Cowboy became a phenomenon and country music’s popularity hit an all-time high. “I figured it was going to catapult my career or set me back 10 years,” Lee says with a grin. “I had no idea it was going to be as big as it was. All I know is that it’s got staying power.

It’s still played all the time.” Lee continued to score such hits as “One in a Million,” “Bet Your Heart on Me,” “You Could Have Heard a Heartbreak,” “Be There For Me Baby,” “Sounds Like Love,” “Cherokee Fiddle,” “Pickin’ Up Strangers” and others. Over the years, Lee’s discography has grown to include two dozen albums. Everything’s Gonna Be Alright is Lee’s first album release since 2016’s You Ain’t Never Been to Texas.

Lee now makes his home in Branson, MO, but traveled to Nashville to co-produce his new album with Buddy Hyatt. “The last few years have had some major ups and downs in not only my life but in the whole world,” Lee acknowledges. “Music brings us together and gives us peace of mind like nothing else. Throughout my entire career, I have worked hard to record the best music possible and while creating this album, that was the entire goal. This is a hard world we are living in, but I want everyone to know that ‘Everything’s Gonna Be Alright.’”

In addition to the encouraging message of the title track, Lee also shares a recitation of the Pledge of Allegiance. “I was just inspired to do it. I said give me a guitar and play ‘America, The Beautiful,’ and let’s do this,” he says of the stirring patriotic moment.

Among the album’s many highlights is the fiddle-laced “Take Me Back to Texas.” Though Lee didn’t write the moving ballad, it sounds as though he could have. “When I first heard it, I heard Lee Ann Womack sing it on some television show she did and I said, ‘Oh my God!’ That song made me cry and I wanted to do it,” Lee shares. “So I found it and told Buddy I wanted to do it exactly like Lee Ann did it.”

“I Know Me” is a song Kelly Lang wrote specifically for Lee after a conversation they had about an old love. “Kelly and I went to dinner on a cruise one night and we had a deep conversation about it. I didn’t know she went right to her room and wrote that song from our conversation. I don’t know what the hell I told her. We were talking about Charlene. Maybe it’s about her,” Lee says of his ex-wife, actress Charlene Tilton.

Lee recorded “There Never Was a Doubt in My Mind” as a promise to his co-writer Alex Harvey. “He’s passed away now, but before he died I told him I was going to put this on my record. He never got to hear it, but he’s hearing it in heaven now,” Lee says. “I always used to say that when I made a long putt or something. If someone said, ‘Do you think you can make it?’ I’d say, ‘Never was a doubt in my mind man!’ So I started writing that song and had it mostly written except the chorus. Alex came and picked me up one day and I said, ‘Let’s finish writing this song’ and we went over to his house and finished it that day.”

Having Nelson play guitar on “Did You Enjoy Hurting Me” was a dream come true for Lee. “I wrote that song for Willie Nelson,” he says. “At the time I was singing at Gilley’s. I wrote that song a long, long time ago and didn’t know how to get it to him. I just remembered it and I always heard Willie playing guitar on it. So I called him up and asked him if he’d play on the song I wrote for him. He said, ‘Send it to the studio,’ so I did and he recorded it. When he said, ‘Yes,’ I said, ‘Man, if I die now, I’ll be a happy man.’”

Lee’s new album also includes “Annie,” an earnest love song he first recorded on his Lookin’ for Love album. Lee wrote the song about a girl he met after he and Gilley had played a show at the legendary Palomino Club in North Hollywood. “I took her back to hotel and we sat there in the hallway talking. It turned out she was a songwriter and singer,” he recalls. “I tried to get her to go back to Nashville with me. I was going to take her to the studio with me. She didn’t go, but I promised her I’d write her a song. So I started writing the song that night and finished it the next day.”

As fate would have it, Annie resurfaced in Lee’s life many years later. “I was working on an album with Curb Records and the guys brought in a pretty girl to sing with me and low and behold it was Annie,” he says. Though it was nice to reconnect, the two never forged a relationship and didn’t work together any further.

On his current album, Lee invited a longtime friend to sing with him on “A Song for You,” turning the classic ballad into a duet. “I sang with Toni Jolene. She and I used to sing together at Gilley’s,” he says. “She’s a minister now and I called her up and said, ‘I want to do this song with you.’ It was one take and done. I love that song. She and I did it as a duet. She still sings.”

The closing song on the album, “Father’s Daughter,” is a loving tribute to Lee written and sung by his daughter Cherish. “Every time I get pissed off at Cherish, I listen to that song and it gets me over it and makes it all better,” Lee says with a laugh, obviously proud of his daughter, but steadfastly refusing to get all mushy.

Like all musicians, Lee is anxious to get back to touring in the wake of the pandemic, and plans to resume the Urban Cowboy Reunion Tour in celebration of the film’s 40th anniversary. He could rest on his considerable laurels, but being an entertainer isn’t something he can walk away from. “That’s who I am,” he says. “That’s what I do. That’s what I’m all about.”